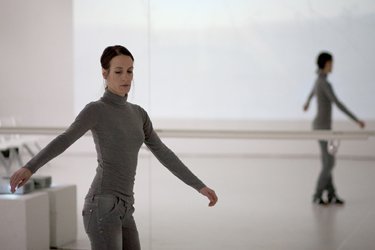 Paces is a dance solo presented in a clear and minimalistic Choreography. As an audio-visual installation, it also concentrates on the politically engaged subject of body vs. antibodies. Petra Zanki dressed in grey is performing in an almost neutral space accompanied by projections, music and the simplest possible movements like the sway.

PETRA ZANKI (HR) is a performance and dance maker based in Zagreb, Croatia. After receiving her MA in comparative literature and French, Petra pursued her studies at the Theatre and performing arts department at the Sorbonne Nouvelle in Paris. As dancer and performer she worked together with Croatian and Slovenian directors and groups such as Oliver Frljić, Via Negativa, Montažstroj & Shadow Casters. Her contributions have been published in magazines «Kazalište», «Kretanja» & "Frakcija". In 2010, together with Britta Wirthmüller, collaborating on the cycle Antibodies, she was awarded as best young choreographer at the Croatian Choreographers platform.  In 2012 Petra received SPAZIO grant from International Choreographic Center Emio Greco-PC, Amsterdam. She currently works on her new choreographic cycle "Changelings" and is artist in residence in Zagreb Dance center and Monty theatre Antwerpen.