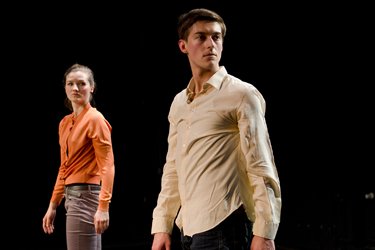 First Life – a Melodrama deals with fictive and real life partner relationships, with love affairs, break-ups and society. Often people speak about their private lives and ask others for their opinion. It’s generally agreed that although emotions are important, it’s not worth getting hysterical about the current liaison and that everything is relative.

Supported by the residency programme PACT Zollverein in Essen and Künstlerhaus Mousonturm Frankfurt am Main.

VERENA BILLINGER (DE) und SEBASTIAN SCHULZ (DE) already performed together on stage 12 years ago. Verena studied The Scenic Arts in Hildesheim and Applied Theater Studies in Gießen. Sebastian likewise studied Applied Theater Studies, Contemporary and Classic Dance, choreography and performance in Gießen and Frankfurt.
Since their studies they have realized various peformance, choreography and installation projects, as a duo and in other constellations – with professionals, children and young people.  Their work "ROMANTIC AFTERNOON *" - originated within the frameworks of “Freischwimmer”´2011 - was performed in Germany (also at "Wunder der Prärie"), Austria, Switzerland and Sweden. In 2012, the production was awarded at theatre festival “Favoriten” in Dortmund and thereby included in the performance network of the cultural office of North Rhine-Westphalia. Further productions: "Drei Schwestern" (Theater Freiburg), "PET_6: computerised movement" (Tanzlabor_21, Frankfurt), "Dream Land: How Things Go" (FFT Düsseldorf/Mousontrum Frankfurt): At the moment they work on "Kummerkasten Menschen Stadt”, a city based play developed in Frankfurt and Düsseldorf.
Homepage: www.das-schau-an.de