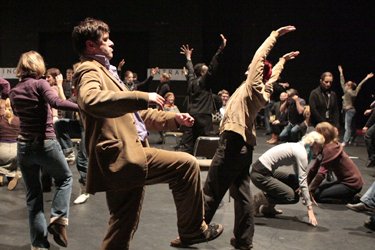 "Der neue Mensch" is an interactive performance inspired by the visions of a new man by the poet Bertolt Brecht, the dancer Rudolf von Laban, the director Wsewolod Meyerhold and the comedian Charlie Chaplin. LIGNA presents a radio play to the audience via headphones, which includes information about the four visions and linked instructions.

The group LIGNA (DE) exists since 1997 and consists of the artists Ole Frahm, Michael Hüners and Torsten Michaelsen. Since 2002 their work concentrates on new ways of media and performance art. All works of LIGNA have in common, that they comprehend their audience as a collective of producers, which can lead to unpredictable effects. Other models of media usage are “Radio Ballet” or the “Radio concert for 144 mobile phones”.