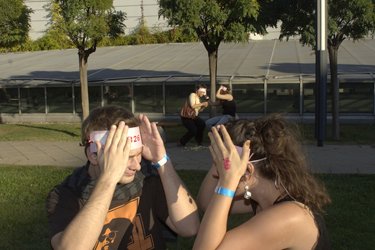 30 players are taken on the Mannheim Games Tour: Searching for “Love at First Sight” in the city, getting rid of “Unwanted Entities” and acting as sheep or wolves to prove your social skills. Games are fun and make us happy together in a world full of loneliness, boredom, greed and betrayal. Who wants to play?

Started in 2009 by Sebastian Quack, Invisible Playground works as a collective of game designers, artists, theater makers, musicians and academics sharing a passion for using cities as platforms for play. They make site-specific games and design playful systems that remix the connections between people, the environments they inhabit and the technology they use.