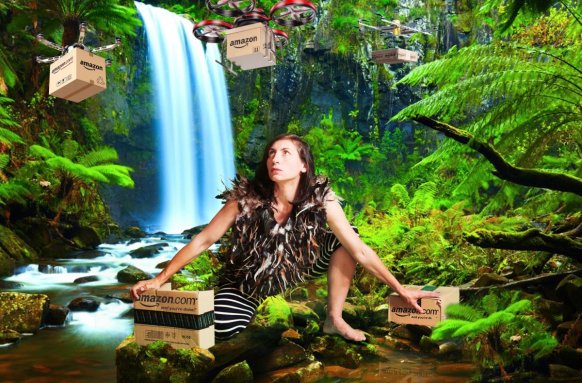 This is Sophie’s last session at shopaholics anonymous. Sophie is not only a shopaholic, she also suffers under techno-stress, data asphyxiation, information fatigue syndrome, cognitive overload, and time famine. She has decided to leave it all behind, to disconnect from the grid, return to the jungle, unplug and connect with nature. She is going to the Amazon… Amazon - River Deep is a modern fable. It’s one woman’s story about life in an age in which the Internet has lost its narrative of equal access and sharing and has become dominated by winner-take-all companies that are now monopolizing vast swaths of our information economy.


Anna Mendelssohn (AT) studied Acting in the UK. Since 2004 she is a member of the Vienna based theatre company toxic dreams. She has also worked with numerous other directors and choreographers. Her own works include Cry Me A River (2010), which received several prizes; art for a lonely heart  (2011); The Rise and Fall  (2011); The Furious Ballade of Folk (2012); WHAT ? (2013); Frozen Eggs - Feminism and the Bauchgefühl (2015) and Amazon – River Deep (2016) .
www.annamendelssohn.net

Yosi Wanunu (US/AT) works as a director. He studied Art History, Theatre and Film in Israel, Europa and the USA. Before he moved to Vienna in 1997, he lived and worked in NYC for eight years, showing his work in theatres like the BCBC, Ohio Theatre, La Mama ETC, the Here and at Richard Foreman’s Ontological-Hysteric Theatre. He is founder and artistic director of the label toxic dreams under which he has created over thirty productions since 1998. He also teaches and works with other companies and performers throughout Europe.
www.toxicdreams.at