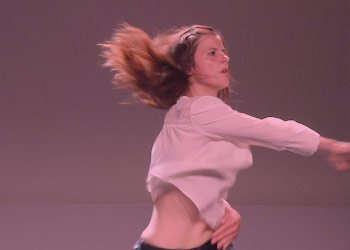 A woman faces an overwhelming situation. A question that is contemporary and universal at a time, comes to her mind: must one enter the fight or give up? Powerful, energetic movements accompanying Beethoven’s monumental “Ode to Joy“ contrast with introverted, cautious gestures to the music of Jack DeJohnette. Space, time and musicality compose the frame of this dance, in which the performer writes her own corporal score in the moment.


GLÒRIA ROS was born in Spain in 1986. In 2006 she graduated from the dance-conservatory in Barcelona, and has since been working with numerous groups and in a wide range of international productions. Her choreographic work includes Tip ing point (2012) and To The Last, recently premiered in Barcelona. Her production „0RB1T“ won the first prize in the Shortcut-Festival in Graz in June 2014.
French choreographer and dancer EMILIE BIRRAUX studied at Rosella Hightower's in Cannes and at the Rotterdamse Dance Academy. She has been working as a dancer since 2000 (a.o Club Guy and Roni, Jens Van Daele, Arthur Rosenfeld). Since 2009, she 's been making her own work: „Blue Tape“, „Night“, „Kikas“ and „ Joy“.
In 2015, CDC|Le Pacifique in Grenoble, France invited her for a choreographic residency.