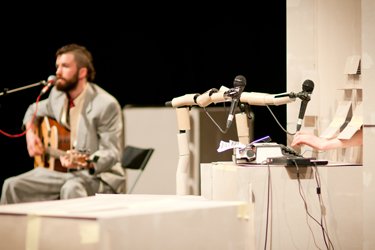 Tickets at the box office!

Tickets at the box office.

Monkeymind is a Buddhist term and refers to a restless, temperamental, strange and confused spirit. Simon Mayer portrays this spirit on stage and tries to find the suitable way of expression by using text, music, singing, movement and performance. He tries to calm this spirit and communicate his intentions also with a hidden acoustic performance.

SIMON MAYER (AT), performer/dancer, choreographer and musician, born in 1984 in Austria, studied at the Vienna State Opera Ballet School and the Performing Arts, Research and Training Studios (P.A.R.T.S) in Brussels and was member of the Vienna State Opera Ballet. In 2009, he founded the band ”Risinghalfmoon“ as singer, guitarist and songwriter. As dancer/choreographer and musician he was involved in productions of Anne Teresa de Keersmaeker/ ROSAS (“The Song“), Wim Vandekeybus (“Frisking“) and Zita Swoon. His choreographic repertoire includes solos, duets and group pieces that have been performed internationally (o feather of lead; dancing with the sound hobbyist/ZitaSwoon; Monkeymind and others). Simon was Artist in Residence at Theatre de LL in Brussels and istheartisticdirector of thefestival “SPIEL“, which he started together with his brothers and the club m-arts.