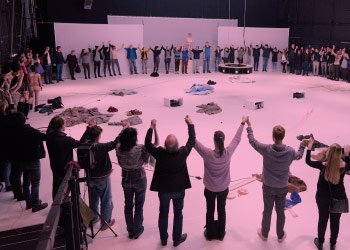 Performance Version I
REMAINING TICKETS AT THE BOXOFFICE

catastrophic paradise is a composition of variations about paradise as a guarded enclosure, about the deluge as a violent reset of society, and about abandoned areas, about the margins of society revealing more about this society than its center; it is a composition about cannibalism as a condition in which the human being eats itself: an approach to the (post)colonial condition of the world. Religion appears as timeless cypher and political background for excluding the “others”.

An accessible performative landscape of installative objects, rituals, voices, choreographies and sound-compositions by Günther Auer, a space shared between the audience and an international company of dancers and performers. Furthermore, statements about revolution, civil war, terrorism, and democracy taken from interviews Claudia Bosse has conducted in New York, Beirut, Tel Aviv, Tunis and other places since 2011.
Texts by Montaigne, documents by General Butt Naked, reports about a plane crash in the Andes with subsequent cannibalism as well as extracts of the Genesis become embodied through choral and monologic speech acts.

The world premiere took place in Düsseldorf in a former theater and cinema. In Mannheim, the work will be adapted to the special requirements of a former video library.
The installation in the performance space as well as parts of the interview collection are open for visitors during the festival.
The artists continue their work on the project in Mannheim. The second performance offers a revised version of catastrophic paradise.

theatercombinat is a production company for independent art and theater work, directed by CLAUDIA BOSSE. She assembles actors, performers and dancers as well as theorists, sound and media artists, architects, visual artists and technicians in order to engage in research into theatrical concepts, pushing theatre beyond its limits in search of new ways to communicate with the audience, the space and the organisation of the public.

This event is made possible by INTPA - INTERNATIONALES NETZ FÜR TANZ UND PERFORMANCE AUSTRIA of the Tanzquartier Wien funded by the BKA and BMEIA.